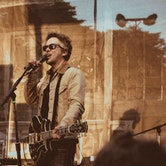 Mash-ville™ is Steeple Street Music Academy’s annual songwriting competition! It is our mission to provide the opportunity for both aspiring and established songwriters to have their songs heard on our professional outdoor stage in our beautiful Cape Cod, Massachusetts.  SSMA has designed this competition to nurture the musical talent of songwriters on all levels and promote excellence in the art of songwriting. Amateur and professional songwriters and musicians are invited to participate.

Fans fell for Nick Fradiani as he soared through American Idol, claiming the champion title and releasing his debut solo project, ‘Hurricane.’ Now settled from the whirlwind of television shows and record deals, the poetic singer/songwriter is focused on translating his next body of work to live performances because, at the root of it all, his fans make him the artist he is today. Fradiani has shared the stage with notable acts like One Republic, DNCE, Rachel Platten, James Bay and Rob Thomas. He will kick off the ‘Where We Left Off’ Tour in September, headlining venues across the country with stops in Chicago, Los Angeles, New York and Nashville.

Congratulations to the Mash-ville 2019 winners:

Aaron’s song was a unanimous win with the judges. He incorporated all of the pieces necessary to produce a hit song, including lyrics with descriptive imagery that conveyed a relatable scenario along with a catchy melody.  SSMA wishes him great luck in Nashville!

“John and the Wall,” Genevieve Sull

Born and raised on the beach peninsula of Cape Cod, Massachusetts, Morgan Johnston has always been destined to make waves. Morgan taught herself to play guitar at 13 years old. Armed with this new ability, she immediately began documenting her feelings, angst, and the misadventures of teenage love. More than that, Morgan used songwriting as a way to analyze and understand her own emotions. She would soon come to find out that her interpretations of life through song touched others, as well. This connection to other people drove Morgan to continue writing and sharing her art. Morgan took the spotlight at local open mic nights, dazzling bargoers and fellow musicians alike with her impressive talent at such a young age.

Ten years later, Johnston still narrates her journey through song, but has built her home and community in Nashville, Tennessee – singer/songwriter mecca of the United States. Her debut single, “Good Guy”, released in August 2018, features raw and heartbreaking lyrics expressed beautifully through sweet and tender vocals.

As a pop-country artist, Morgan is influenced by modern singer/songwriters such as Lori McKenna, Maren Morris and Kacey Musgraves. Johnston describes her sound as “a blend of Kacey Musgraves and Kelsea Ballerini.” This unique combination will be featured in her new music coming in 2019.

“I’ve never been afraid of being vulnerable. I’m not sure if that’s a strength or a weakness, but it’s certainly helped me as a songwriter.”